Home / Without Label / Yin Yang, a Symbol of Balance and Harmony

Yin Yang, a Symbol of Balance and Harmony

Yin-Yang is a deeply rooted concept in Taoist philosophy, representing the constant state of change or duality in the universe forming a whole. It describes how opposite forces are interconnected and mutually dependent in the natural world; and, harmony is only achieved when the two forces combined, are in balance. 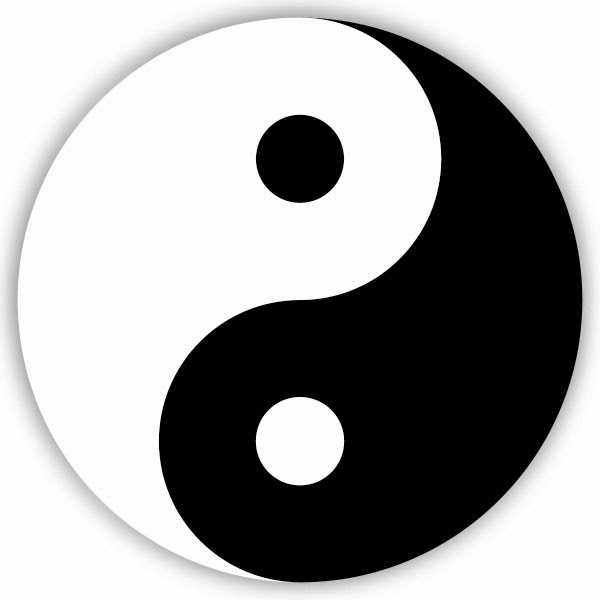 Any phenomenon within nature can be understood in relation to another; one will always be yin or yang in comparison with the other. For example, the morning fog (yin) is dissipated by the heat of the sun (yang); the darkness of night (yin) is replaced by the light of day (yang). One simply cannot exist without the other, shadow can’t exist without light.
Yin is characterized as slow, soft, yielding, diffuse, cold, wet, and passive; and is associated with water, earth, the moon, femininity and nighttime.
Yang, by contrast, is fast, hard, solid, focused, hot, dry, and aggressive; and is associated with fire, sky, the sun, masculinity and daytime.
Yin-Yang are continuously changing, and are endlessly transforming one into the other in an eternal dance of becoming, and within this constant change is a cyclical pattern. The symbol shows the cyclical changes, and the dots inside the white and black halves indicate that within each is the seed of the other.
Yin Yang and the Human body -
According to traditional Chinese healing practice, the life-energy or qi flows through channels or pathways known as meridians, which exist within the subtle body. The two most fundamental forms of qi are Yin-qi and Yang-qi – the primordial feminine and masculine energies.
The balance of Yin-Yang can be skewed if there is excess or deficiency of either Yin or Yang. For example – excess of Yang results in fever, excess of Yin could mean the accumulation of fluids in the body. When the yin and yang aspects of Qi are in harmony with one another, there is health, wellbeing and contentment.
Excess or deficiency of Yin or Yang is based on your lifestyle – the food you eat, air you breathe, exercise, your psychological and mental state. For instance – excessive thinking, worry, stress or negative emotions will lead to imbalance in vital energy or Qi in your body.
Our internal organs also have their own balance of yin yang. The five yin organs include the liver, heart, spleen, lungs and kidneys. Yin functions tend to be nourishing, cooling, building, and relaxing and relate to the structure, or substance, of the organs.
Yang qualities tend to be energizing, warming, consuming, digesting, stimulating and relate to the functional activity of the organs.
Yin yang do not exist in isolation but are in a dynamic state in which they interact and regulate themselves so as to maintain equilibrium in the human body.
How can we apply Yin-Yang in our daily lives?
Chuang Tzu, another legendary Taoist sage, states that depending on your point of view, “Everything can be a ‘that’; everything can be a ‘this.’ Therefore, ‘that’ comes from ‘this’ and ‘this’ comes from ‘that’ – which means ‘that’ and ‘this’ give birth to one another. When there is no more separation between ‘that’ and ‘this’, it is called being one with the Tao.”
Yin-yang tries to show that life is possible only because of the interplay between the natural forces. Instead of trying to reach the extreme of anything (too much wealth, total happiness, no fear, etc.), one should seek balance between the two.
We live in a society where we are conditioned to think either “good” or “bad”, “right” or “wrong”, “light” or “dark”, but we must look beyond these contradictions and embrace it, flow with what comes along. Don’t forget what goes up comes down, and vice-versa, we all are part of the other side in some way; part of the whole.
Many a times we struggle with a situation because we fail to acknowledge change or are resistant to it, but if we are attuned to the patterns of change, we have the potential to be a harmonizing force.
The following lines from Lao Tzu (Tao Te Ching – Chapter 4) explains this beautifully -The Tao is an empty vessel; it is used, but never filled.Oh, unfathomable source of ten thousand things!Blunt the sharpness,Untangle the knot,Soften the glare,Merge with dust.
Image Source and references:
Yin Yang
The Nature of YinYang
Ancient wisdom for a modern world
What is yin yang
Yin Yang