Reflexology is the application of appropriate pressure to specific points and areas on the feet, hands, or ears. Reflexologists believe that these areas and reflex points correspond to different body organs and systems, and that pressing them has a beneficial effect on the organs and person's general health. For example, reflexology holds that a specific spot in the arch of the foot corresponds to the bladder point. When a reflexology practitioner uses thumbs or fingers to apply appropriate pressure to this area, it affects bladder functioning.

Although reflexology is not used to diagnose or cure health disorders, millions of people around the world use it to complement other treatments when addressing conditions like anxiety, asthma, cancer treatment, cardiovascularissues, diabetes, headaches, kidney, function, PMS, and sinusitis.

Reflexology is growing increasingly popular across Europe and Asia as both a complement to other treatments and as a preventive measure. One example is Denmark, where various municipalities and companies have employed reflexologists since the early '90s.

According to several studies, this practice in Denmark has resulted in reduced sick leave and absenteeism (and significant economic savings for the employers). Employees have consistently reported complete or partial improvement in conditions where they sought reflexologists' help and even relief for additional problems related to stress. In one municipal district, almost one-third of the employees reported greater satisfaction with their jobs after completing six sessions with a reflexologist.

In reflexology theory, points and areas on the feet, hands, and ears correspond to specific organs, bones and body systems. Practitioners access these points on the feet and hands (bottom, sides, and top) and the ear (both inside as far as the finger can reach and outside) to affect organs and systems throughout the entire body.

Maps of reflex points have been passed between practitioners across the globe. Understandably, there is not agreement among all reflexologists on all points; however, general agreement does exist on major reflex points. Some scientific documentation of linkages between the skin and internal organs also exists.

Here is a map of the hand A reflexologist may perform a general, integrated session, or may focus on specific problem areas on the feet, hands or ears. For example, if time is limited and the person really needs to relax, the reflexologist may choose just to work on the ears.

Whatever the approach, the reflexologist attempts to release congestion or stress in the nervous system and balance the body's energy.
Acupuncture and Acupressure


Reflexology is similar to acupuncture and acupressure in that it works with the body's vital energy through the stimulation of points on the body. However, acupuncture/acupressure points do not always coincide with the reflex points used in reflexology.

Reflexology and acupressure are both "reflex" therapies in that they work with points on one part of the body to affect other parts of the body. While reflexology uses reflexes that are in an orderly arrangement resembling a shape of the human body on the feet, hands, and outer ears, acupressure uses over 800 reflex points that are found along long thin energy lines called meridians that run the length of the entire body.

Massage:
Some people confuse reflexology with massage. While both massage and reflexology use touch, the approaches are very different.

.Massage is the systematic manipulation of the soft tissues of the body, using specific techniques (for example, tapping, kneading, stroking, and friction) to relax the muscles.

.Reflexology focuses on reflex maps of points and areas of the body in the feet, hands, and ears using unique micromovement techniques such as thumb or finger walking and hook and backup to create a response throughout the body.

Another difference between massage and reflexology is that a client will stay fully clothed for a reflexology session except for removing footwear, whereas clients remove clothing for a massage session. Dr. Fitzgerald's work was expanded by Dr. Shelby Riley, who developed a map of horizontal zones going across the body and a detailed map of reflex points on the feet and hands. He also suggested pressure points on the outer ear.

Reflexology symbols are also thought to be recorded on the feet of statues of Buddha in India and later China. The Chinese classic, the Yellow Emperor's Classic of Internal Medicine, which was written around 1,000 BC, has a chapter on "Examining Foot Method" and is the beginning of discussions in print about the connection of life force and points and areas on the feet.It is believed that Marco Polo translated a Chinese massage book into Italian in the 1300s, thus introducing reflexology and massage to Europe. In 1582, a book on an integral element of reflexology called zone therapy was first published in Europe by Dr. Adamus and Dr. A'tatis.

Where does reflexology come from? 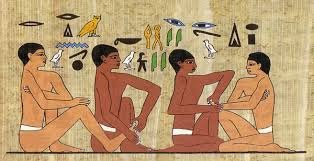 Because reflexology is an ancient practice, its origin and history is difficult to track. However, red possibly first recorded as a pictograph on the Egyptian tomb of Ankhamor. Reflexology is thought to have been passed down through an oral tradition, ann 2330 BC along with other medical procedures.

In the United States, William H. Fitzgerald, MD, who is frequently referred to as the father of reflexology, wrote in 1917 about ten vertical zones that extended the length of the body. He found that the application of pressure to a zone that corresponded to the location of an injury could serve as relief of pain during minor surgeries.