Here’s Why You Should Convert Your Music To 432 Hz 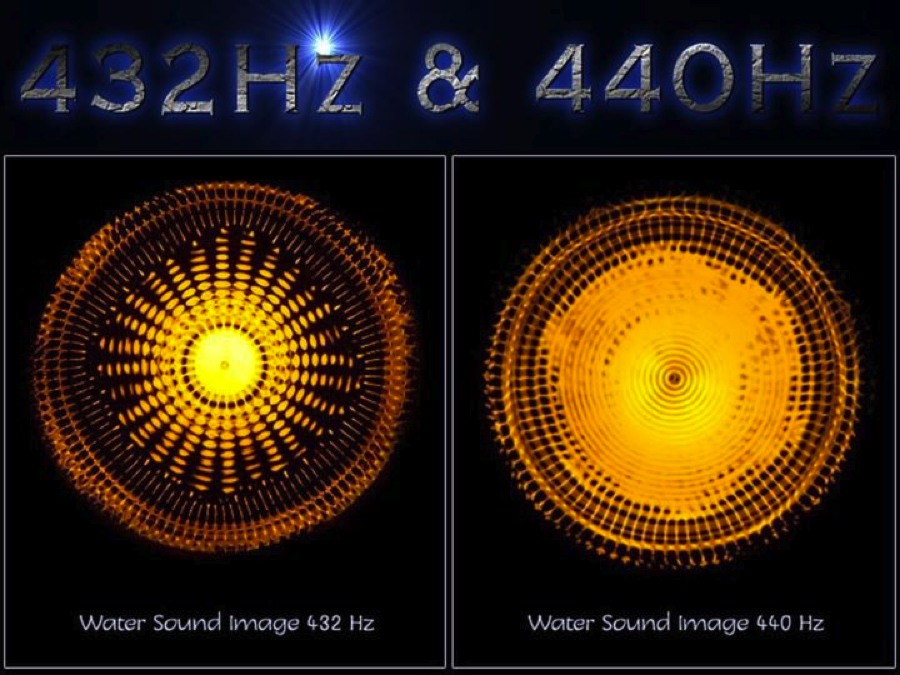 “If you want to find the secrets of the universe, think in terms of energy, frequency and vibration.” – Nikola Tesla

“What we have called matter is energy, whose vibration has been so lowered as to be perceptible to the senses. There is no matter.” – Albert Einstein

Water memory also illustrates how our own intentions may even alter the material world. This has been demonstrated by Dr. Masaru Emoto, who has performed studies showing how simple intentions through sound, emotions and thoughts can dramatically shape the way water crystallizes.

We all hold a certain vibrational frequency, not to mention our bodies are estimated to be about 70% water… so we can probably expect that musical frequencies can alter our own vibrational state. Every expression through sound, emotion or thought holds a specific frequency which influences everything around it—much like a single drop of water can create a larger ripple effect in a large body of water.
Music Frequency
With this concept in mind, let us bring our attention to the frequency of the music we listen to. Most music worldwide has been tuned to A=440 Hz since the International Standards Organization (ISO) promoted it in 1953. However, when looking at the vibratory nature of the universe, it’s possible that this pitch is disharmonious with the natural resonance of nature and may generate negative effects on human behaviour and consciousness.
Some theories, although just theories, even suggest that the nazi regime has been in favor of adopting this pitch as standard after conducting scientific researches to determine which range of frequencies best induce fear and aggression. Whether or not the conspiracy is factual, interesting studies and observations have pointed towards the benefits of tuning music to A=432 Hz instead.

Mathematics of The Universe

432 Hz is said to be mathematically consistent with the patterns of the universe. It is said that 432 Hz vibrates with the universe’s golden mean PHI and unifies the properties of light, time, space, matter, gravity and magnetism with biology, the DNA code and consciousness. When our atoms and DNA start to resonate in harmony with the spiraling pattern of nature, our sense of connection to nature is said to be magnified. The number 432 is also reflected in ratios of the Sun, Earth, and the moon as well as the precession of the equinoxes, the Great Pyramid of Egypt, Stonehenge, the Sri Yantra among many other sacred sites.

“From my own observations, some of the harmonic overtone partials of A=432hz 12T5 appear to line up to natural patterns and also the resonance of solitons. Solitons need a specific range to form into the realm of density and span from the micro to the macro cosmos. Solitons are not only found in water mechanics, but also in the ion-acoustic breath between electrons and protons.” – Brian T. Collins

Another interesting factor to consider is that the A=432 Hz tuning correlates with the color spectrum and chakra system while the A=440 Hz isn’t aligned.

“The Solar Spectrum & The Cosmic Keyboard:
All of the frequencies in the spectrum are related in octaves, from gamma rays to subharmonics. These colors and notes are also related to our Chakras and other important energy centers. If we are to understand that (…) Chakras are connected to the Seven Rays of the Solar Spectrum, then the notes and frequencies we use for the same should be the same. A432 Hz is the tuning of the Cosmic Keyboard or Cosmic Pitchfork, as opposed to the A440 Hz modern ‘standard.’ It places C# at 136.10 Hz ‘Om,’ which is the main note of the Sitar in classical Indian music and the pitch of the chants of the Tibetan monks, who tell us ‘It comes from nature.'” – Dameon Keller

Let’s explore the experiential difference between A=440 Hz and A=432 Hz. The noticeable difference music lovers and musicians have noticed with music tuned in A=432 Hz is that it is not only more beautiful and harmonious to the ears, but it also induces a more inward experience that is felt inside the body at the spine and heart. Music tuned in A=440 Hz was felt as a more outward and mental experience, and was felt at the side of the head which projected outwards. Audiophiles have also stated that A=432hz music seems to be non-local and can fill an entire room, whereas A=440hz can be perceived as directional or linear in sound propagation.

“The ancients tuned their instruments at an A of 432 Hz instead of 440 Hz – and for a good reason. There are plenty of music examples on the internet that you can listen to, in order to establish the difference for yourself. Attuning the instrument to 432 Hz results in a more relaxing sound, while 440 Hz slightly tenses up to body. This is because 440 Hz is out of tune with both macrocosmos and microcosmos. 432 Hz on the contrary is in tune. To give an example of how this is manifested microcosmically: our breath (0,3 Hz) and our puls (1,2 Hz) relate to the frequency of the lower octave of an A of 432 Hz (108 Hz) as 1:360 and 1:90.” – innergarden.org
“The overall sound difference was noticeable, the 432 version sounding warmer, clearer and instantly sounded more listenable but the 440 version felt tighter, with more aggressive energy.” – Anonymous guitarist

The video below was created by someone with no preference or opinion on whether A=432 Hz or A=440 Hz is better. Therefore, the way both versions of the melody is played is unbiased. It is up to us to tune in and feel which one feels more harmonious to us!

I personally have enjoyed many bands, artists and styles of music even though they were tuning in A=440 hz, however by comparing a few songs in both A=432 hz and A=440 hz, I can feel and hear the difference. I wouldn’t say that my experience of 440hz music has turned me into an aggressive person, but I can understand how an entire population being exposed to music that is more mind directed as opposed to heart directed—not to mention all of the materialistic and ego-driven lyrics in most popular music—is a perfect combination to maintain a more discordant frequency and state of consciousness within humanity.

“Music based on C=128hz (C note in concert A=432hz) will support humanity on its way towards spiritual freedom. The inner ear of the human being is built on C=128 hz” – Rudolph Steiner

I cannot state with complete certainty that every idea suggested in this article is 100% accurate, nor am I an expert on the subject. I simply gathered interesting information from others having researched this issue more deeply. For this reason, I suggest that we each do our own research on the matter with an open yet discerning mind if we are looking for scientific validation. Perhaps more scientific validation could be done in the near future to explore this topic.
I believe we all possess intuition and the ability to observe without judgment, which can be more useful than resorting to ridicule when exposed to information that has not yet been accepted by the scientific community. It is therefore up to us to tone down the urge to jump to conclusions and instead EXPERIENCE the difference between A=440 Hz and A=432 Hz. To do so, we need to listen with our entire body and a neutral awareness as opposed to with our mental ideas, judgments and preconceptions. Let me know which frequency resonates more with you!
If you are interested in changing your music’s pitch to A=432 hz, click HERE to learn how to do it.

What kind of audio converter could I do this with?