Home / Without Label / Where we experience emotions in our body

Where we experience emotions in our body 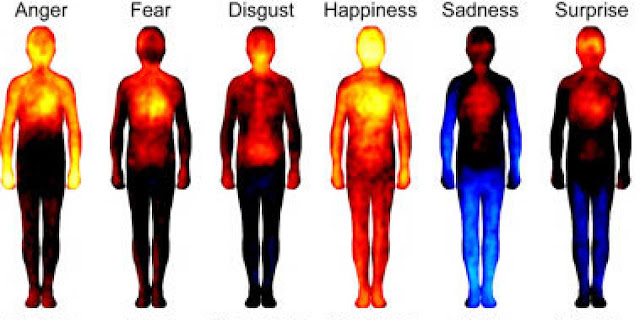 Researchers Aalto University have revealed how emotions are experienced in the body.

Emotions adjust our mental and also bodily states to cope with the challenges detected in the environment. These sensations arising from the bodily changes are an important feature of our emotional experiences. For example, anxiety may be experienced as pain in the chest, whereas falling in love may trigger warm, pleasurable sensations all over the body. New research from Aalto University reveals, how emotions are literally experienced through the body.
The researchers found that the most common emotions trigger strong bodily sensations, and the bodily maps of these sensations were topographically different for different emotions. The sensation patterns were, however, consistent across different West European and East Asian cultures, highlighting that emotions and their corresponding bodily sensation patterns have a biological basis.

Emotions adjust not only our mental, but also our bodily states. This way the prepare us to react swiftly to the dangers, but also to the opportunities such as pleasurable social interactions present in the environment. Awareness of the corresponding bodily changes may subsequently trigger the conscious emotional sensations, such as the feeling of happiness, tells assistant professor Lauri Nummenmaa from Aalto University.
The findings have major implications for our understanding of the functions of emotions and their bodily basis. On the other hand, the results help us to understand different emotional disorders and provide novel tools for their diagnosis.
The research was carried out on line, and over 700 individuals from Finland, Sweden and Taiwan took part in the study. The researchers induced different emotional states in their Finnish and Taiwanese participants. Subsequently the participants were shown with pictures of human bodies on a computer, and asked to colour the bodily regions whose activity they felt increasing or decreasing.
The research was funded by European Research Council (ERC), The Academy of Finland and the Aalto University (aivoAALTO project)
The results were published on 31 December (U.S. Eastern time) in the scientific journal Proceedings of The National Academy of Sciences of The United States of America (PNAS).
Source : Aalto University

Where we experience emotions in our body
4/ 5
Oleh Renato Toska
Pada 10:54 PM Komentar